Take Zehnder's Home With You... 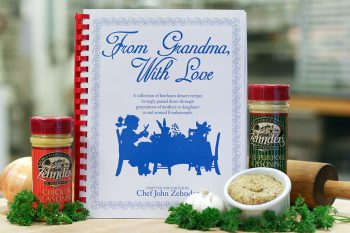 Contains recipes that have been passed down from generation to generation. You can request to have your book personally autographed by Chef John Zehnder.

Contains recipes that have been passed down from generation to generation. You can request to have your book personally autographed by Chef John Zehnder.

From Grandma, With Love – A Treasure Trove of Heirloom Recipes by Chef John Zehnder, CEC, ACE, HGT, AAC
When I set out to write this book – edit is a better term because the recipes were already in existence – I had to decide how old a recipe would have to be to qualify as an “heirloom”. As you page through my cookbook, you’ll see that 50 years is about the minimum number of years to qualify, but many can be documented long before that time frame. About 80% are older than 75 years and Mrs. Solomon’s Rhubarb Crunch is confirmed to date back to the 1860’s.

All of these recipes were written in either faded fountain pen or a #2 pencil – remember fountain pens? Yellow dog-eared pages with that funky smell of age are common in my stacks of recipes. But…don’t let that fool you! Treasures lie in fading hand written words. Tradition and pride are written between the lines alongside a smudge or two from some long forgotten day of baking.

Pulling out my cardboard boxes of heirloom recipes gives me the same feelings as flipping through old photo albums – nostalgia. Snapshots of the past – frozen in time.

My cookbook is from the heart – a project in the making since that first recipe was recorded back in 1860. Generation after generation passed them down – a legacy of love. Some of the recipes are my grandmother’s and yet others are here mother’s. Somehow I find comfort in reading recipes in my grandmother’s handwriting. They speak of a time when family values really meant something. A time when a man’s word was “good as gold”. They hint of long ago celebrations and sometimes sadness. They off us a unique peek into the way things used to be.

Some recipes you’ll love, other you won’t. But…somebody liked them enough to pass them down three and four generations.

And now it’s your turn to bake some memories.

Zehnder’s Executive Chef John Zehnder, CEC, ACE, HGT, AAC
An excerpt From his cookbook “From Grandma, With Love” – A collection of heirloom dessert recipes lovingly passed down through generations of mothers to daughters in and around Frankenmuth.

There are no reviews yet.

Be the first to review “From Grandma, With Love – John Zehnder’s Dessert Cookbook” Click here to cancel reply.

We guarantee your complete satisfaction. Tell us if something's not right. If it's in our control, we will make it right. You have our name on it.
Cart
Checkout - $0.00